We had a PHENOMENAL work day last Saturday! We ended up with 24 volunteers (including two Forest Service representatives) so we got a lot accomplished!

MORE TO DO IN THE FUTURE

Thanks everyone for coming out! 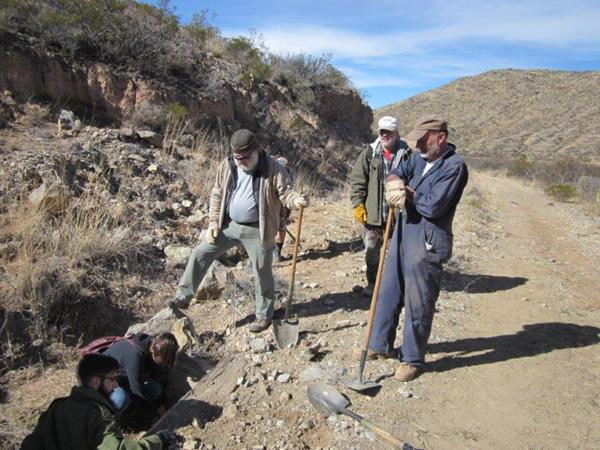 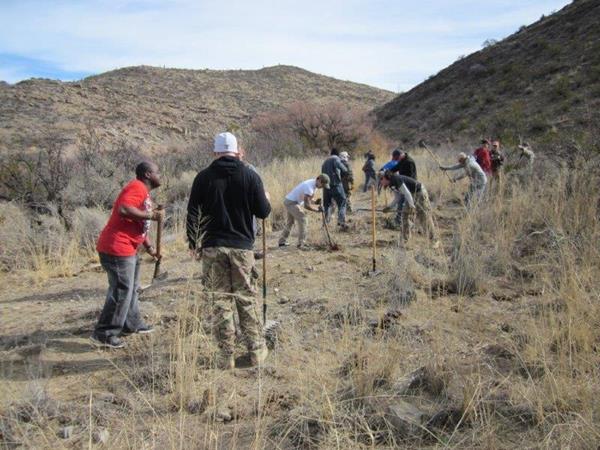 Cleaning up the rail bed! 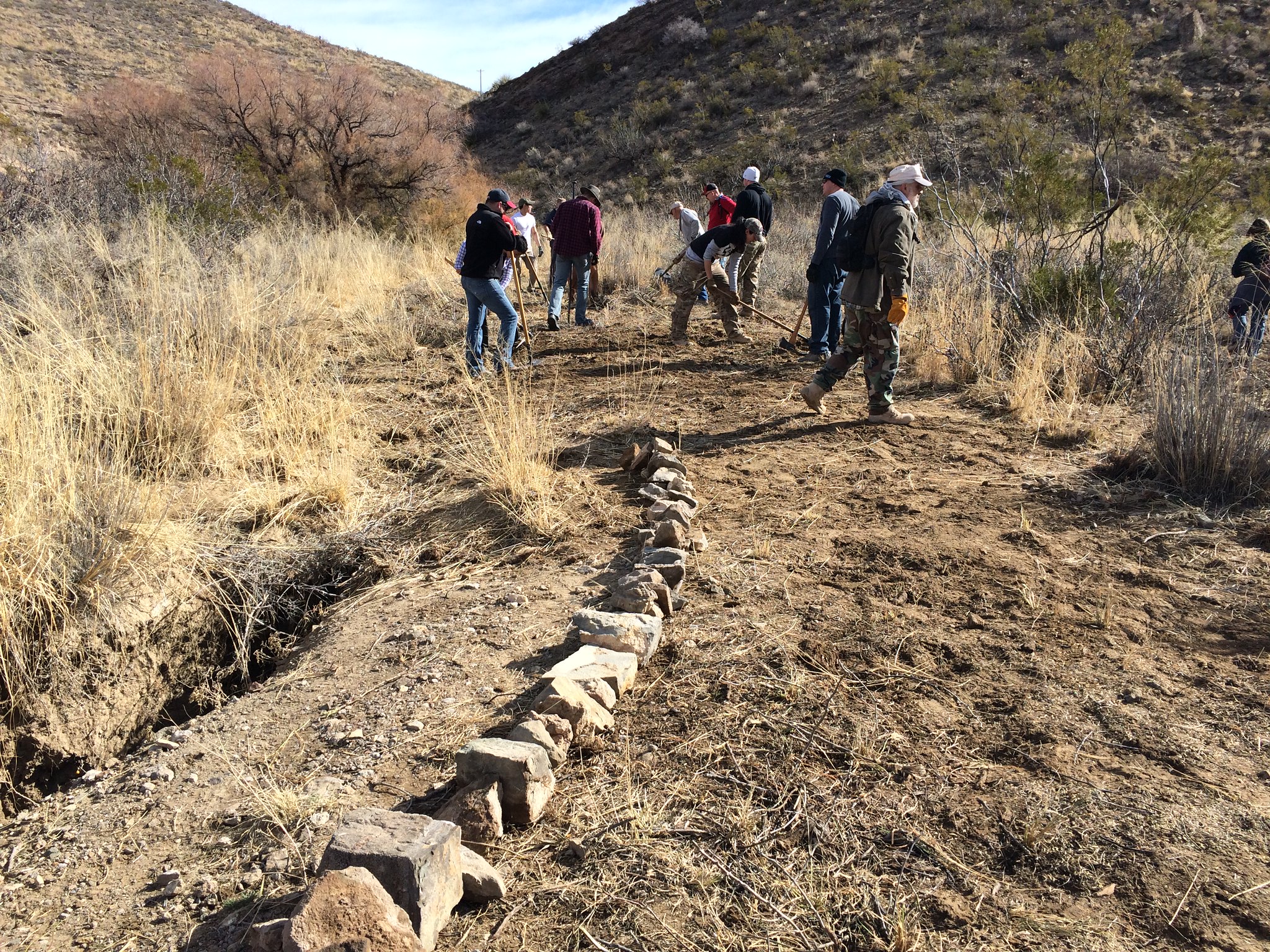 Even though we had to reschedule this month’s workday at the least minute, we had another great turnout!  18 willing and able bodies showed up and met again at the top of the Bridal Veil Falls trail.

We ended up splitting into three groups and spread out a bit on the trail — one group began working on the erosion control culvert area; another headed down the trail and worked on some erosion control (lots of rock-moving) and yet another group followed a forest service worker driving a small excavator, helping spread out the dirt and rocks dug out from the edge of the trail. The ultimate goal was to help give any future water a better place to go rather than wash away the existing trail! The pace was a little slow and some heavy rocks were hauled off the trail, but all in all it was a great success!

Next month, we will continue restoring the 100+ year old erosion control structure and continue trail repair, all in this same area. 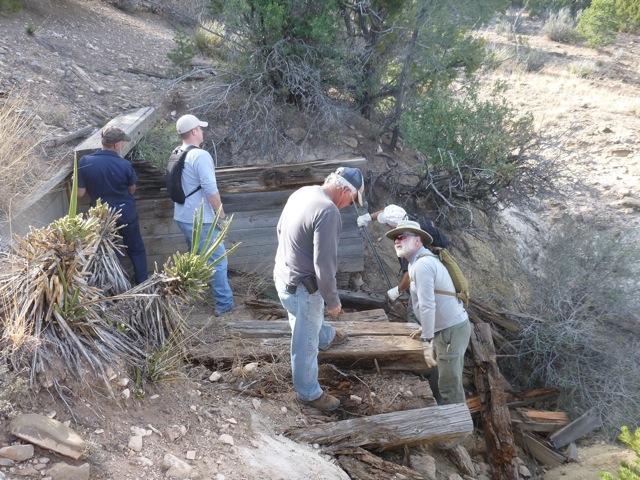 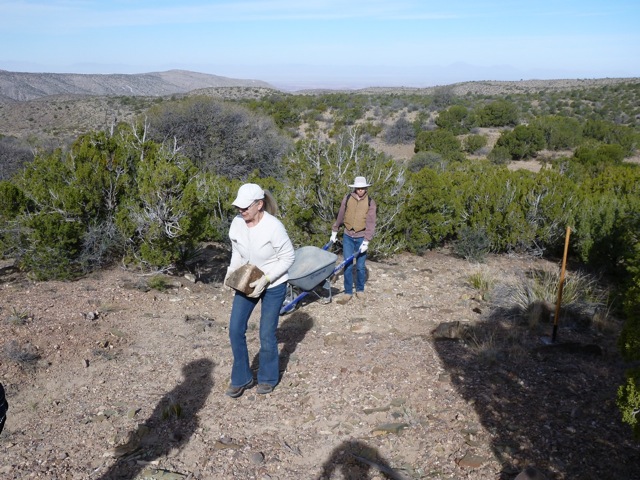 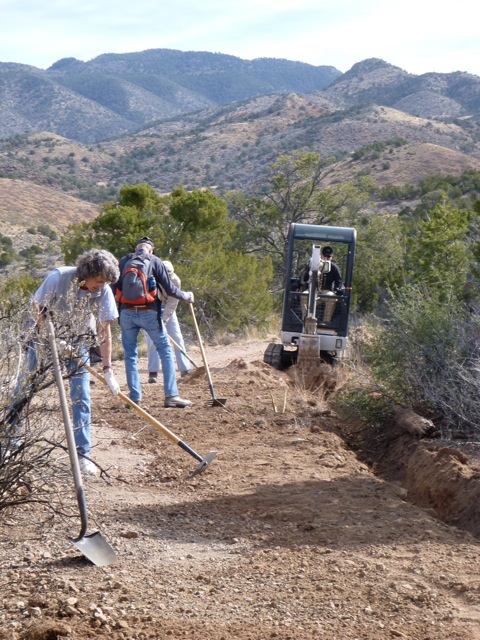 We had yet another very successful workday this month! We had a great turnout with 21 volunteers to include two out of state visitors — Roger and Holly Rosin — from Minnesota. They were corralled in to our workday by Rails-to-Trails member John Reimer.

Thirteen volunteers gathered at the parking area at the top of the Bridal Veil Falls trail and walked the 1/2 mile down-trail to the worksite where 2 Forest Service representatives, Dario Samora and Heather Burman (along with other volunteer trail workers) met everyone after using a private back road to deliver an excavator and hand tools needed for the job.

Dario, under the guidance of Heather, dug almost 450 feet of drainage ditch with the excavator.  The huge amount of resulting dirt and rocks had to be moved and relocated by hand and wheelbarrow to fill in eroding sections of the trail and to smooth the trail tread.

The new ditch, and another 600 feet or so of existing ditch, had to be cleared of debris, rocks, shrubs,  and some of the original rail road ties.  Of course, all the railroad memorabilia was carefully repositioned along the trail out of the path of potential water damage.

One particularly large rock in the path of the excavator had to be broken with chisel and sledge into several manageable pieces for moving — it was a really back-breaking and bone jarring ordeal!

All this “chain-gang” type rock and dirt work, and a warm day, proved to be very exhausting, even to the five Holloman volunteers whom we relied on for their strong backs while those who were a little older and smart enough not to get caught up in the heavy rock stuff and pushing wheelbarrows, cleared culverts in the area and “beautified” the trail by smoothing the dirt and lining the trail with rocks.

Next month, we plan to  begin restoring a 100+ year old erosion control structure and continue trail repair, all in this same area. 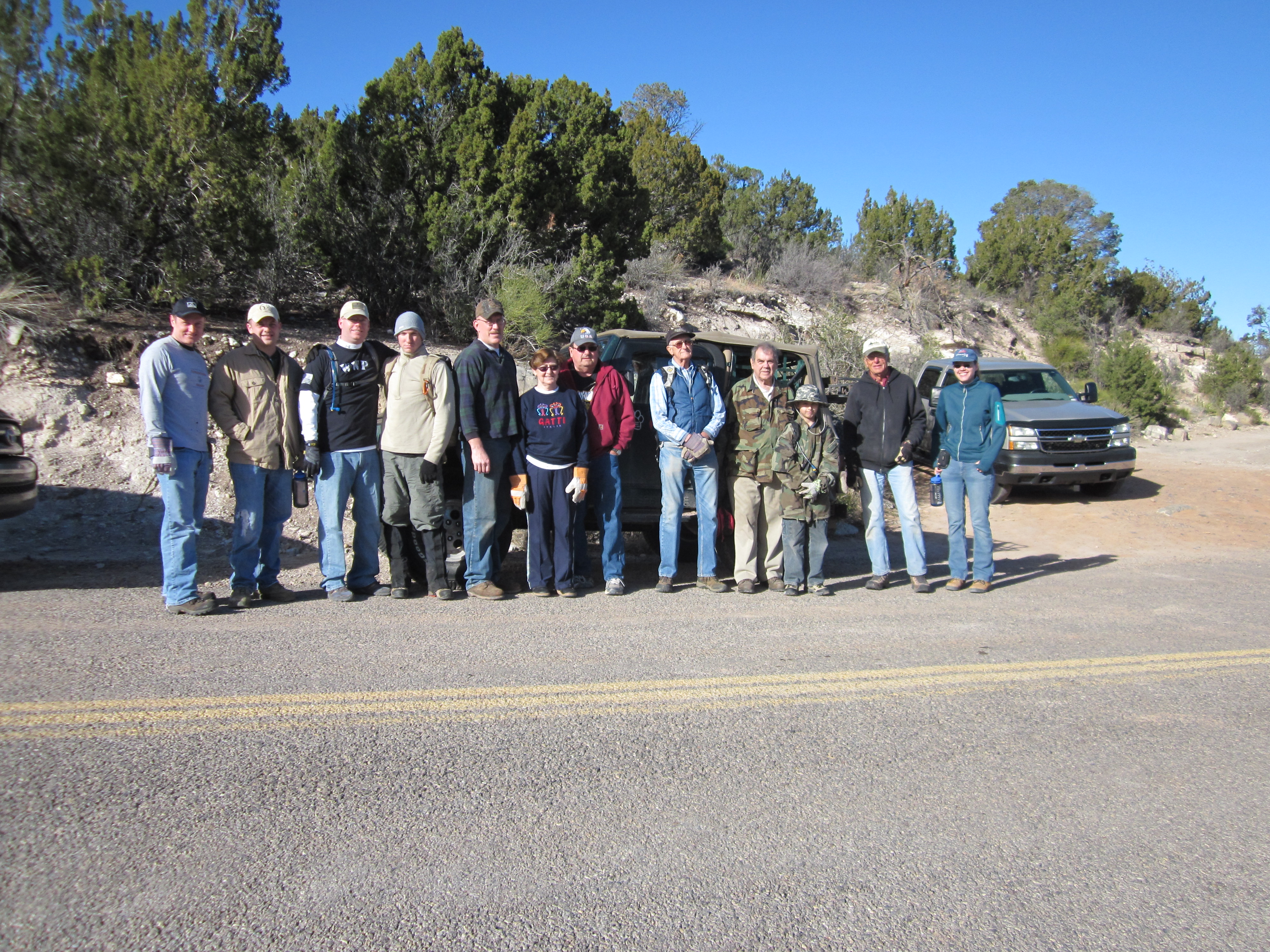 Just a few of our volunteers for the day 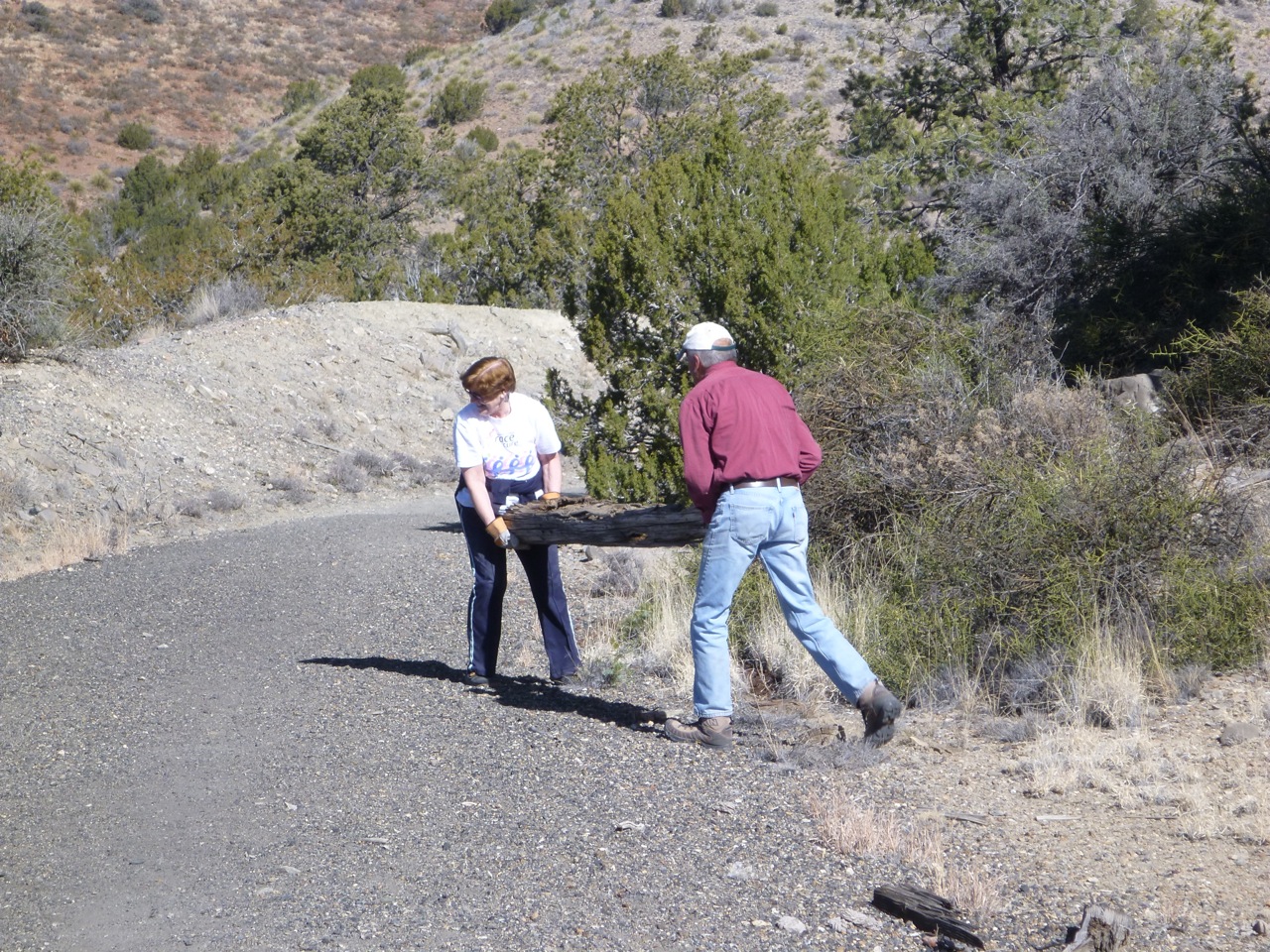 Some volunteers hauling some of the seemingly endless dirt and rocks 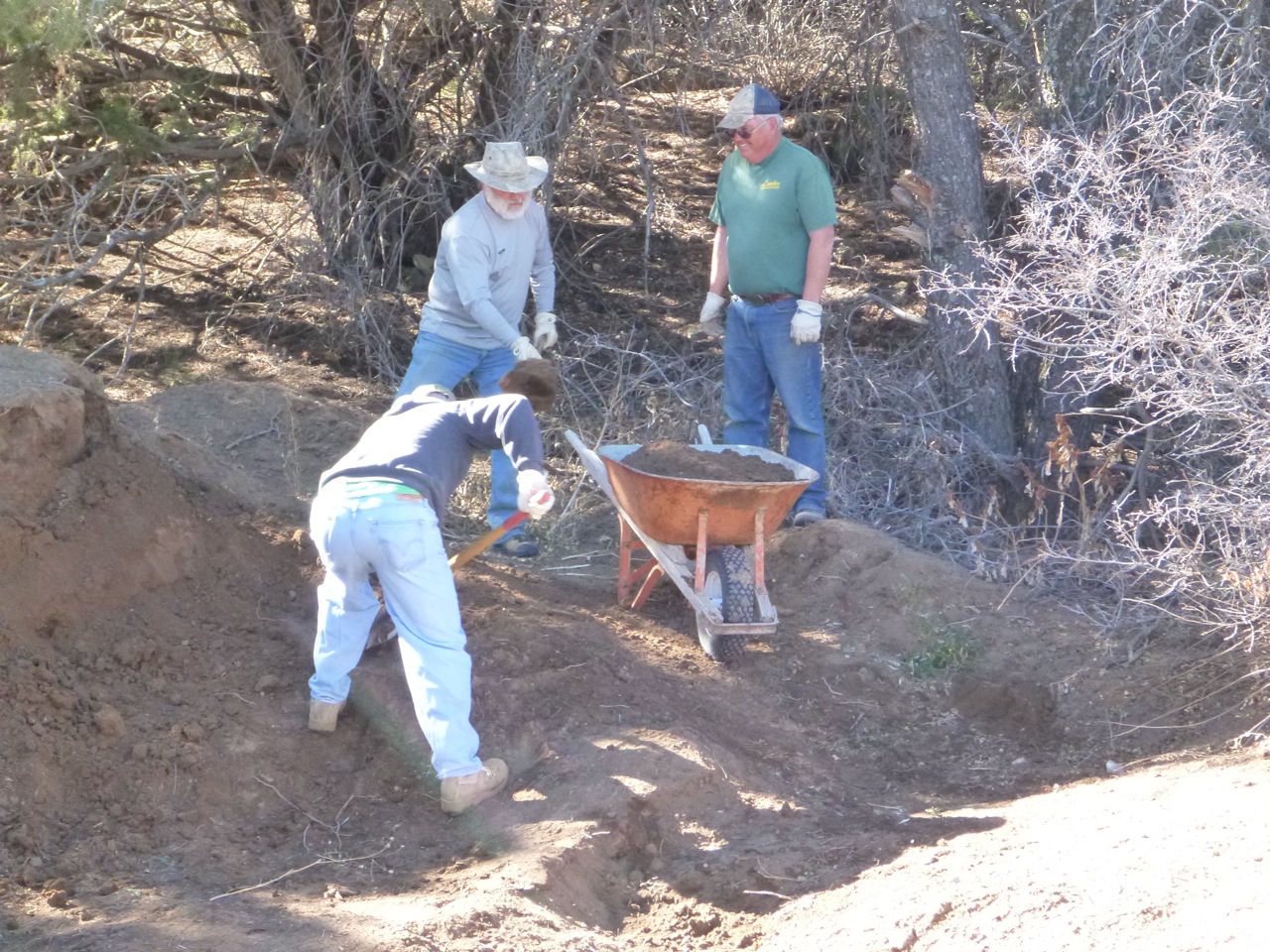 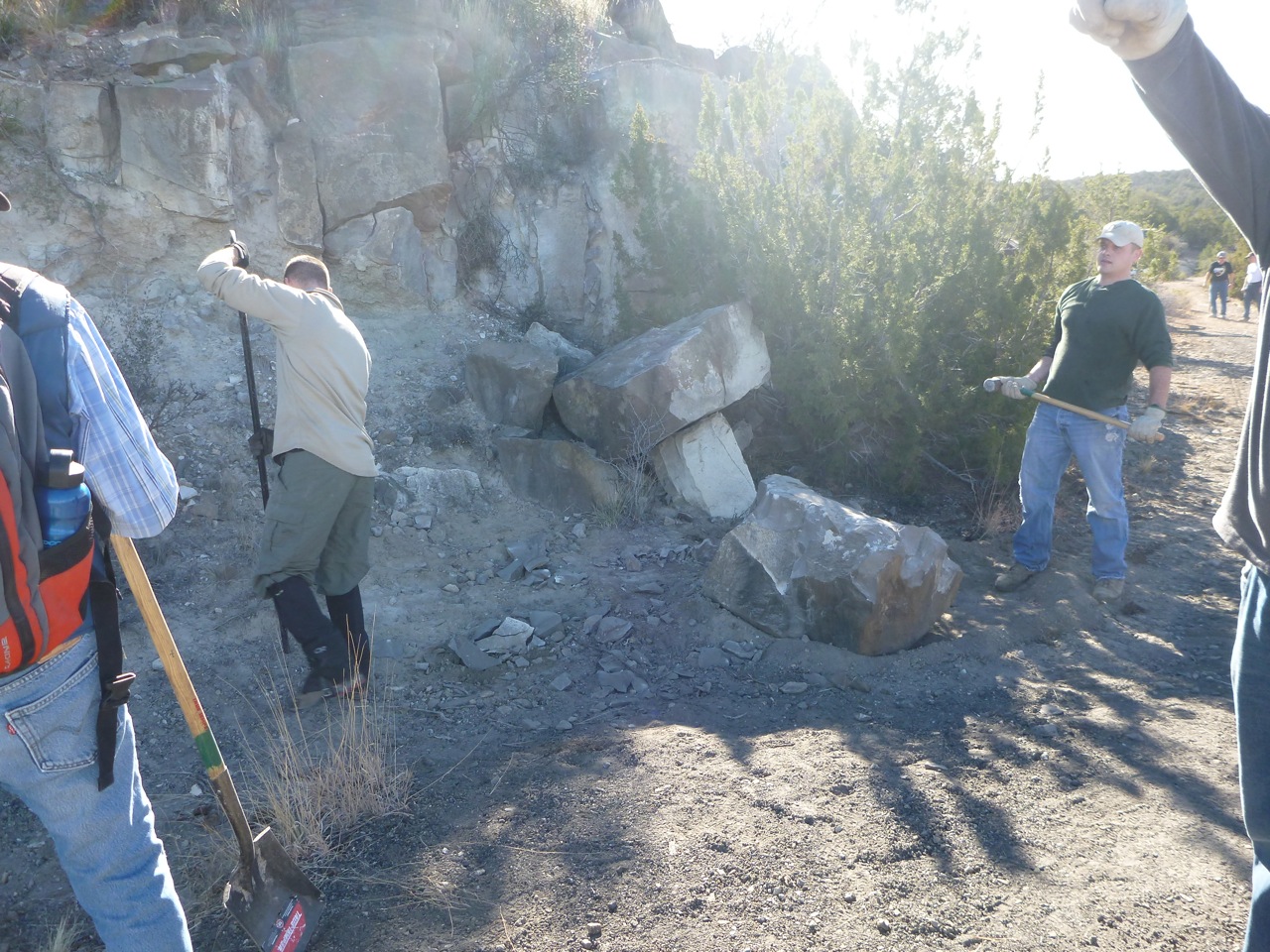